So, the year has just started and already, 2 wildly different kick butt pieces of news to share.

First – I’m lucky enough to say I have some seriously talented, hard working friends. On the 28th of December at 2pm a cast of 9 singers, 8 band members, a director, stage manager, costume designer, sound designer and a 3 person crew got together to put on a show at the Fireside Dinner Theatre in Fort Atkinson, WI. The show was conceived by our Director, Ed Flesch, who was also a member of the cast. This would usually seem like a normal task for all of us but here’s the kicker… the show went up on New Years Eve. That’s 2.5 days to put on a full 2 Act 2.5 hour show in a 700 seat theatre.
I don’t know how – but we did it! And… it was actually pretty fantastic. Only a few little word flubs here and there, but I can say without a doubt both of our full houses had a great time, and so did we. Here’s a few pics from the crazy day. 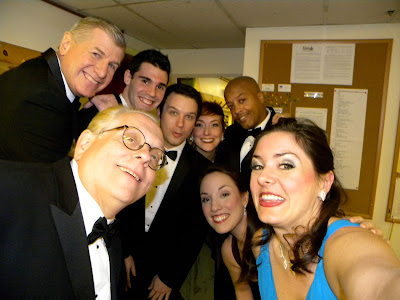 Here’s few members of the cast right before the show. 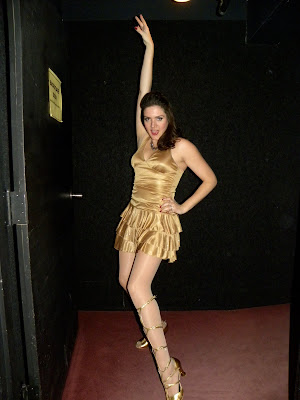 I sang Goldfinger and got to wear some AMAZING shoes. 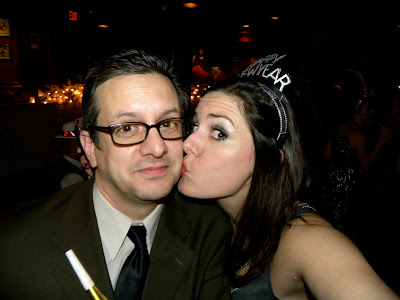 My fiance John Dominguez who also played bass in the show!
And – my second bit of news…
So – I wake up this morning, clearly EXHAUSTED. We get ready and head to spend a nice day off with JD’s family. On the way to their house we stop to look for a book for his mom. She’s also an avid knitter and has been wanted to knit a top down raglan sweater for his dad. I found a book that looked just right called Knit on Down. It has several patterns that are mostly seamless and mostly knit from the top down. Done and done. As we head to the register, I tell JD I want to stop by the magazine section.
SIDE NOTE – A few weeks ago, after announcing to my Molly Made Facebook group that my Doggie Shrug pattern is now available at www.redheart.com, Drew Emborsky (aka The Crochet Dude) mentioned there was a Doggie Shrug used as a full page add in the Jan/Feb issue of Crochet Today. I honestly thought he was mistaken. I was a little sad and thought someone else must have written a Doggie Shrug pattern. I often buy this crocheting magazine, but I don’t subscribe because I spend so much time on the road doing shows. It’s hard to have magazines forwarded all over the country. I’ve looked for it in several shops, but had yet to find the Jan/Feb edition.
So, we stopped by the craft/hobbie magazine section of this Barnes and Noble in Milwaukee. I gave JD one copy and I took one copy. I started slowly page by page, he quickly leafed through and… BAM! There’s a giant pic of my Doggie Shrug on the inside of the back cover! I seriously freaked out!! I screamed and jumped up and down. I have got to be the biggest dork in the world!
It’s an add for Red Heart Yarn which is a great tried and true brand you can get mostly anywhere. My name isn’t even listed by the picture – but I could care less! I’m seriously so honored and excited to see that they are using something I created. I also have a pattern for Flower Petal Leg Warmers available on their website and I have a secret pattern coming out on another website… so I know this is just the beginning. I do wonder if, some day, seeing my piece in a mag will be old hat, but I will never forget how unbelievably excited I was to see my first piece in print. Knowing it is in book stores and yarn shops all over the country, sends me over the moon. 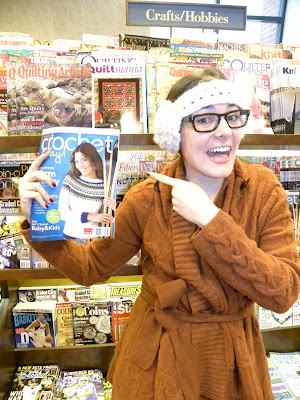 I had JD take some pictures of me with the magazine before I bought a few copies. I do think it is really hilarious to compare the pic of me in my Goldfinger costume to the pic of me in my tragic day after the show get up. (I love this giant knit Anthropologie sweater.) Oh the “glamorous” life of an actress with an addiction to yarn. 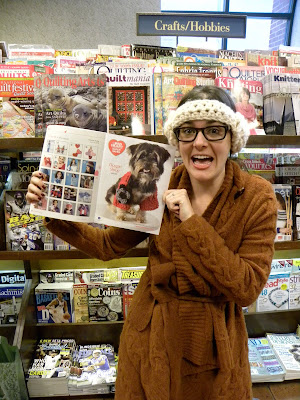 I can’t believe it took so long to find! Maybe I was meant to find it today as a way to kick off the new year.