Philly has been a crazy whirlwind week!  I began the week teaching two classes through a great company called Broadway Connection.  I really do miss teaching.  The kids were great! Several of the
students also came to the show. I gave them a backstage tour and they were so excited.  Luckily my fellow cast mates were good sports.  Dirk Lumbard (who plays Boris) stood there and smiled while they all took close up shots of his face. It was so funny.  Once they had their fill of Dirk they all began begging for the Child Catcher. Luckily, Oliver Wadsworth was still around.  He was a great sport too. The kids were so happy to get autographs, pictures, and to see how the car flies.      I went straight from teaching on Wednesday to a Seder.  It was my second Seder and I have to say… it was absolutely fantastic!  It was lead by Rabbi Jonathan Blake (the husband of our Truly

Scrumptious, Kelly McCormick). I know so little about the Jewish faith but what I do know, I really love.  Durring the Seder I was reminded of one of my favorite Buddhist quotes – “Believe nothing, no matter who says it, even if I say it, unless it resides within your own heart and your own reason.” I love the idea of being able to question religion and the idea of actually getting answers.  There were several people of different faiths at the Seder, and I really believe 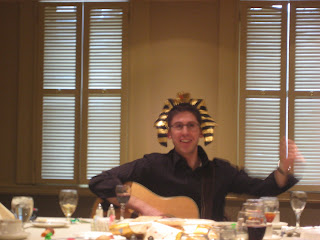 everyone learned something.  Jonathan brought his guitar and several silly items to help explain Passover. I’m so glad we were able to participate. I hope this Seder was the second of many that we will attend.
I also had some AMAZING friends come out from NYC to see the show and hang in Philly.  Sal Sabella and I spent all day Friday walking the entire city.  The murals around this town are out of control! Every time we turned the corner, another huge display of art would whack us in the face.  So cool!  The most amazing was definitely Philadelphia’s Magic Garden. According to their website. The Magic Garden mosaic murals span all over the city.  It reminded me of the 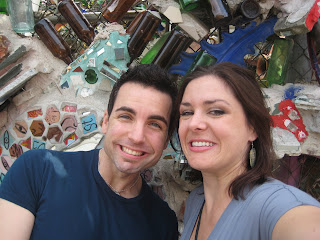 Hundertwasser House in Vienna, Austria.  I especially loved the mirrored bits, because the reflections change depending on where you stand, causing the whole mural itself to change.  In one of the pictures I took, I managed to get the reflection of our eyes. We had such a great day.         On Sunday my amazing besty of about 12 years, Melissa Cullen, came out with her beau 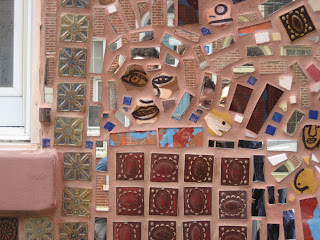 Roger Smith.  We shared lunch between shows with great food, and great company.  I’ve felt so lucky having JD on the road with me for the past few weeks.  Being able to spend time with JD and a few of our friends made it even more sweet. 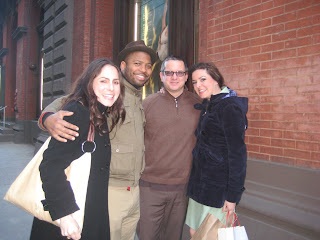 What impressed me most about Philly (aside from the yarn shops which I will get to in another post) was not the art that humans created… but the art that naturally grew on the trees.  I have never seen such amazing blooms and they were everywhere.  It’s like God decided to remind us the reason for the Passover/Easter season.  The trees were screaming look at me, I’m GORGEOUS, and I’m just here to make you smile. 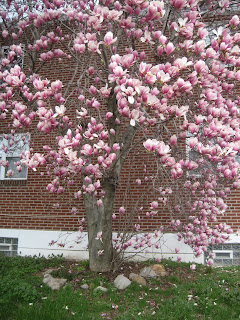 In my mind I’m going to Carolina
YARN STORE KETCHUP, Philly and Atlanta