I recently joined the Crochet Guild of America. What a great decision! I went to their conference in Buffalo and had a fantastic time. My head is spinning with loads of information. I attended the Professional Development day, took 4 classes, and met several professional crochet designers and teachers.

Here’s a few highlights from the week… 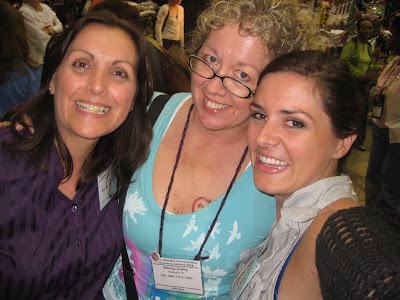 JD came with me to help with the drive and to keep me company when the classes were not in session. But, while I was at the conference, I was on my own. I had made a few connections through Ravelry, and Twitter, but I was still pretty nervous. One of the main connections I had made was with a woman named Jocelyn Sass. (she is known as CuteCrochet on Twitter) She has been a super cheerleader via twitter, but I had no idea she would turn out to be such a Crochet Angel! Jocelyn took such great care of me and explained any goofy question I had with such kindness and intelligence, introduced me to several lovely people (including Wendy Cozby who is with us in this pic) and helped me connect with many designers and editors.Her help on the design front helped me to SELL several pattern designs to two different companies! I’ll have more news on that once things are official. 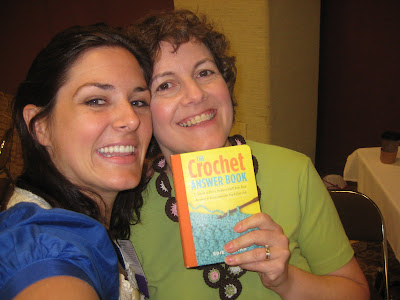 The first and last classes I took were with Edie Eckman. First I attended her
hour long talk about Designing for Publication during Professional Development Day, and I also took her class called “Unlearn to Knit.” I highly recommend both classes. Submitting for publication is definitely a different beast than submitting for an audition. And, after taking her Knitting class, I really feel like I am in control of my stitches. I can actually tell what I am creating with the yarn and the needles, rather than just doing what someone else told me to do. In this picture, Edie is holding one of her books called, The Crochet Answer Book. A book I happen to love and had with me on the road for all 9 months of the Chitty tour. Pretty cool : ) 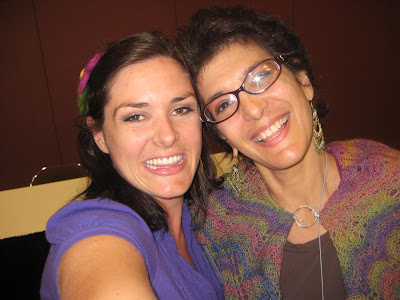 This next picture is with Myra Wood. I sat in on her seminar on Self Publication at Professional Development Day and, took her class on Free Form Crocheted Lace. The info she had to Share about Self Publication was so empowering. I have lists of websites and computer
programs to go through. I have had book ideas in the past, and knowing I can easily publish my ideas myself makes the idea of publishing more of a reality. On Friday I took her class on Free Form Crocheted Lace. Boy, oh boy, was this the class for me. For a long time, I’ve known that my love for crochet is found in the freedom of knowing I don’t really need to follow a pattern. I can follow patterns, but I much prefer to make things up as I work through the piece. This class was like a key to the world of crochet I’d been looking for. My first few pieces were a little funky, but I can see how easy and liberating this style of crochet can be. I also learned that Myra lives in Southern California. If my crazy dream of opening my own shop in So. Cal. becomes a reality, I am so happy to have her as a connection. I can’t wait to set up Myra Wood knitting and crocheting workshops in my own shop. 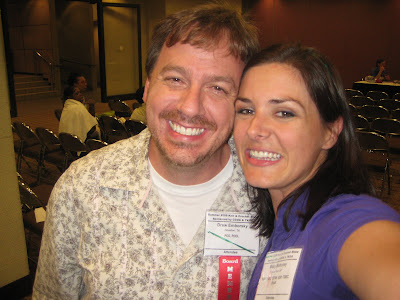 And, here we have… The Crochet Dude! Drew Emborksky (The Crochet Dude) was the MC for the Professional Development Day. He also set up a warm welcome meeting for new members of the guild. Drew and I actually have a funny history. I follow him on Twitter, and while I was in Houston with Chitty Chitty Bang Bang, he tweeted about coming to see the show! I wrote him back and said, “No way! I’m in the show!” We talked a bit about the show and that was that. Then, at the annual CGOA meeting, I won a raffle prize. I went up to get my prize, and in true goofy Mahoney fashion, I decided to give a good ol’ showgirl kick to the face. Clearly this was out of the ordinary in the world of Crochet. I had not yet introduced myself to Drew, but saw him almost die laughing. I had not planned on pulling out a high kick, but it proved to be the perfect reason to introduce myself and remind him that I was in the cast of Chitty. Drew was super supportive and gave me some great tips about the “designer meet and greet” that I attended on the Saturday morning. If our shop plans come to fruition, I’ll definitely be asking Drew to come to Cali as well.

These are just a few of the talented people I met at the convention. Now that I’m home I feel like I’ll never have time to actually put into action all that I learned. But, shoot, I’m gonna try. I’ll end this post with a few links that I picked up this weekend. I can’t wait till the next CGOA week. I feel like I fell in a rabbit hole that took me to a Wonderland of Yarny Goodness. The world is curiouser and curiouser, and boy is it grand.

Jingebrewear
First of all… Jingebre means Ginger in Spanish and I LOVE GINGER. But more importantly… Sheldon, a new up and coming designer, is so super cool and has great ideas. He also was a dancer like me! We had loads in common and I look forward to catching up with him in Chicago sometime soon.
Kim Kotary
I met Kim during professional development day. She lives in Queens! She has some great designs and had great tips on setting up a new web site.
www.crochetingwithdee.com
I also met Dee during professional development day. Then, I took a class called “Crochet Your Knit.” I learned many new techniques including the Tunisian Knit Stitch. Super cool! Check out her site, lots of info!
Doris Chan
I have been following Doris Chan’s blog for a while now, but I’m even more excited about it after meeting her in person! During the welcome meeting for new CGOA members I couldn’t take my eye’s off of her lacy skirt. It had such a youthful bounce. I loved chatting with her and I’m currently obsessed with her Avalon Top which can be found at…
www.NaturallyCaron.com
This website is updated frequently with a free pattern and an audio fashion show! I had a great meeting with Cari Clement from Caron yarns. She knows her stuff, and gets the type of young, funky designs I love. I also really appreciate their work with Rwanda Knits. I’ve used Caron Simply Soft for Skoodies in the past. It makes for a lovely supple cuddly light weight Skoodie. It is so great to know a face behind their designs and yarns.
www.RedHeart.com
I also met with Bobbie Matela of Coats and Clark. They make Red Heart yarn which will always have a special place in my heart. It’s the yarn I first learned to crochet and knit with and I think their website puts it perfectly… “yarn and designs for real life.” You can find Coats and Clarks products everywhere and you can always count on them for sturdy “real life” projects. In fact, I think the first scarf I ever sold was made with red Light and Lofty. Bobbie was the first person I met with at the designer meet and greet and she was super informative and so encouraging.
www.jellyyarns.com
It’s a little kooky, but looks great for kids. I bought some to give to my 10 year old friend Aly. And… I bought the gold sparkly skein for me. I’ll post pics if I come up with something cool. And… their reps were pretty great.